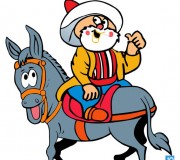 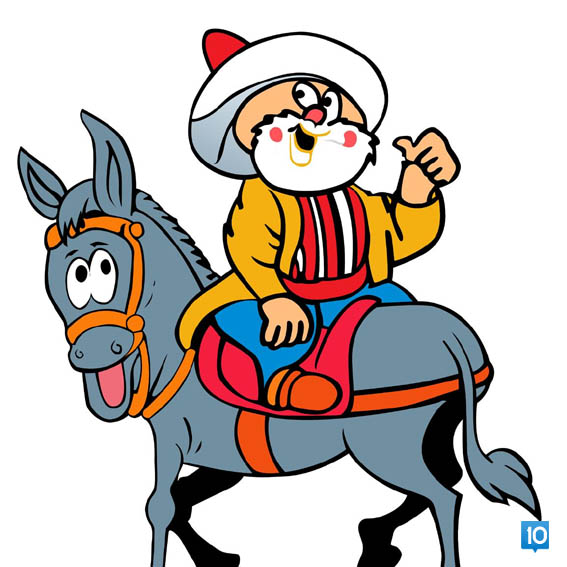 Nasreddin Hodja approached to a crowd gathered around a man in the market of Aksehir. The man was trying to sell his own bird and its

price was too high, 50 Akce (Akce=old Turkish gold coin). On the other side, one chicken was for 5 Akce. The Hodja couldn’t get the much difference in the prices and asks;

-My fellow countryman, what kind of bird is it

-Hodja Effendi, this one is not a kind of bird that you know, this has special property.

-What is its speciality?

-My Hodja, this bird is called parrot and speaks.

The Hodja suddenly runs home, takes his turkey from the coop, and comes back to the market. He stays near the man selling the parrot and loudly;

The most surprised man in the crowd was the seller of the parrot and he asks;

-But you are selling yours for 50 Akce, replies Hodja.

-But mine speaks as I said before

-So what, mine thinks! 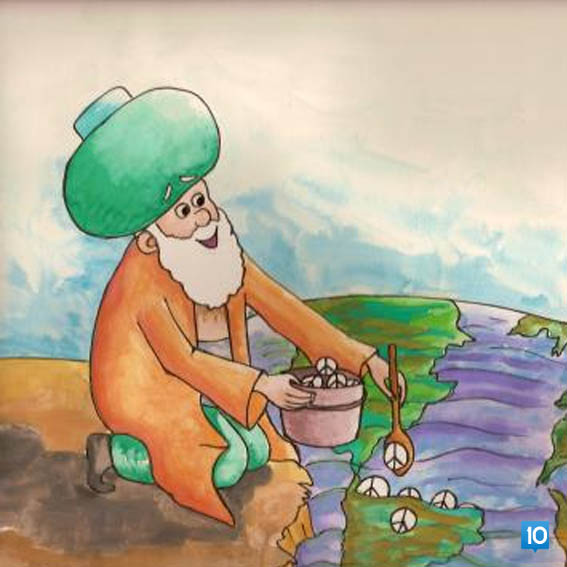 One day, Great Tamerlane goes to the Aksehir Central Hamam (hamam=Turkish bath). In hamam, after undressed and wrapped ‘pestamals’ (large bath towel) around, they enter into hot room. They sit on ‘gobek tasi’ (large very hot marble). While sweating, they chat.

Then Tamerlane asks the Hodja:

-Hodja, you are very learned one! You know to appraise properly. Tell me what is my worth, my value?

Tamerlane flies into a rage about the so low appraisal value for himself.

-You, idiot! says Tamerlane, how can yo say me my value is ten Akces, just this pestamal alone is worth 10 Akce!

-I included that when I gave you my estimate!

An Iranian gave Hodja a letter he had received from a friend back home and asked Hodja to read it to him. Hodja looked at the letter. It was in Persian and the handwriting was terrible so he told the man “Have somebody else read it. “The man insisted. “Listen” said Hodja “I don’t know Persian. Even if it were in Turkish, the writing is so bad that I still wouldn’t be able to read it!” The Iranian got mad, “You are wearing a huge robe and a turban but can’t read even a simple letter. You should be ashamed of yourself!” Hodja took off the turban and the robe and gave them to the Iranian saying “If one can do everything by wearing a robe and a turban then here you can wear them and read the letter yourself!”

Hodja had two wives and, because they were jealous of each other they used to fight quite often. To put an end to the fighting Hodja gave each one a blue bead and said “Now don’t tell the other one that I have given you this bead which is a symbol of my love for you.” One day they were fighting again. They asked Hodja whom he loved the best. He answered calmly “I love the one who has the blue bead.” Each wife then thought Hodja loved her the best and they never bothered him again.

Hodja lost his saddlebag in the town where he had stopped to spend the night. “You either find my saddlebag or I’ll know what to do” he said to the peasants in town. The peasants were alarmed and they looked for it everywhere They finally found Hodja`s saddlebag and returned it to him. Just before Hodja left the town, the peasants asked “What would you have done if we hadn’t found it?” Hodja shrugged his shoulders and said “I have an old kilim at home. I was going to cut it up and make another saddlebag with it.”

Hadja had lost his donkey. While he was looking for it, he kept repeating, “Thank God!”

“Hodja, why are you thanking God all the time?” people asked.

“I am grateful that I was not on the donkey, otherwise I would be lost too.” he answered.

One night, Hodja was waken up by his wife while their baby was crying in his cradle. .

-Hodja, swing the cradle! This baby is not only mine but the half is yours.

-Ok, do it for the half of yours, let the half part of mine cry!.

Nasreddin Hodja was very fond of liver. But every time he brought some home, his wife would seize the opportunity and give a party to her friends. Come evening and the Hodja would again be fed some soup or rice.

The excuse was always the same: “Ah Effendi, that good-for-nothing cat of yours stole the liver and ate the lot!”

On one such night the Hodja could contain himself no longer. He sprang up, fetched the steelyard and tying a handkerchief around the cat’s middle, weighed it carefully. Then turning to his wife:

– I thought so!, he said. The liver i brought home today weighed exactly one kilo. This cat here weighs one kilo too. Well, women, if this be the liver where is my cat?

The Hodja had lost his donkey and was going about searching for it, at the same time singing gaily.

-It looks funny to hear you sing, Hodja Effendi, when everyone knows you have lost your donkey. One would expect to see you wailing and lamenting your loss!

-My one last hope is that the dump creature may be behind that hill, yonder, my friend. Wait and hear the wailing and the lamenting, if that shouldn’t be the case!

-Effendi, Have you ever invented anything?

-I did, replied the Hodja.

-What did you invented?

-to eat the bread with snow… I invented it myself but I, my own too, didn’t approve… 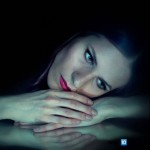 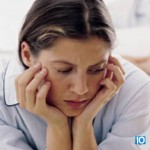